I’ve been tinkering around with these video glasses from Adafruit. There is a cable inside that seemed to have exactly what I need – a cord that runs from the glasses’ 2.5mm TRRS jack to the Pi’s 3.5mm Composite Video TRRS jack. But when I plugged it in, the screen flashed for a fraction of a second and turned black… It is still alive, though – I plugged it into my DVD player’s RCA jack and it was fine.

I took out my multimeter and switched it to Continuity mode. And yep, it was just a standard cable – T connected to T, R to R, R-R, and S-S.

I went back to the Adafruit site and found just what I was looking for: someone had this problem already and posted a fix. Apparently, the Pi’s pinout is VID-GND-L-R, but the glasses want GND-VID-L-R. A very quick fix to see if this kludge will work is to plug the cord in, but not all the way. If you do it right, you get a circuit flowing from the Pi’s Video to the glasses’ Video, and the excess power returns along the glasses’ ground and onto the Pi’s Left Audio. Not the best solution, but it shows if the glasses work.

I stripped away the insulation of the first black sheath, then the second, white sheath, and found 4 wires inside: red, yellow, green, and blue. Nothing very obvious. Again, the handy multimeter in Continuity mode told me that I needed to swap the red and yellow wires.

The insulation on these wires is that horrible stuff you have to sand away. The 48-gauge wires looked like they would sooner break than lose their insulation, so I decided to use the solder to burn through the insulation. I know it’s not the best technique, but I did wipe the first round off and use a second, cleaner round. To my surprise, the second round of the stuff spat more streaks of acrid smoke than the first round. I wiped it off again and tried a third round, which burned through the wires. I re-stripped it and tried again with this definitely-not-a-masterpiece, only using two rounds of solder. 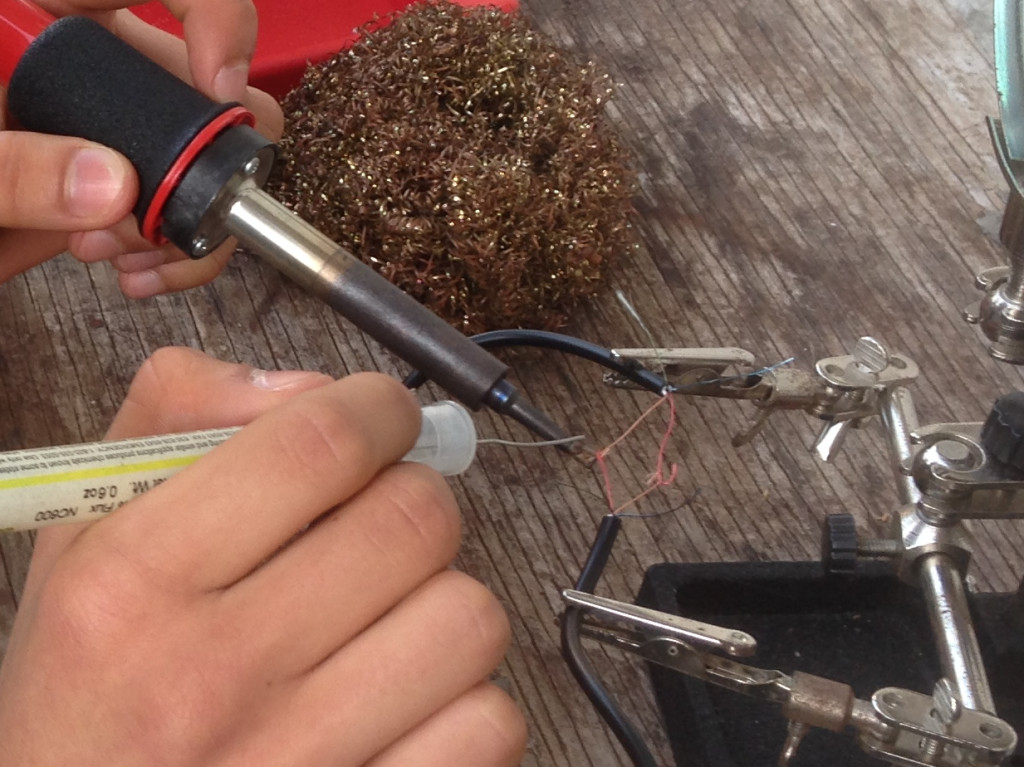 I got the video and ground soldered, but what I was breathing was rapidly becoming more mosquito than air, so I packed up and headed in. I tried connecting the system, and sure enough, it worked! I only have the audio pins left now, and I think I should be able to finish those pretty quickly.

I soldered the last two wires just before the rain hit! Still have the Real-Time Clock to do, though…

Anyway, I tested it again and wrapped the whole assembly in multiple layers of electrical tape, since I’m out of heat-shrink tubing. I’d like to make it a bit more secure but am not sure how to…

It seems to work fine with the Pi, but I can’t get the audio. Maybe it has something to do with my USB sound card?